A resource that uses symbols to encourage inspiring conversation

Symbols are universal and connect people to many aspects of life, feelings, and beliefs.

Symbols is a set of thoughtfully designed cards featuring 100 hand-drawn, iconic images that will resonate with people grappling with the big questions in life. Each card is designed to help us navigate through life and evoke profound emotions and memories that promote healing and change-oriented conversations.

Because symbols have the power to speak directly to our sense of identity, these cards can be used to illuminate almost any situation. They are particularly useful in grief and loss counselling, teaching, therapy, social work and facilitation. In a therapeutic setting, the use of visual images can assist a client in exploring otherwise inaccessible personal realities.

Beautiful in their simplicity, the Symbols cards make great prompts for public speaking, storytelling, icebreaking, mind-mapping and interviewing. Plus, the set includes a 48 page booklet with suggested activities.

The Power of Symbols 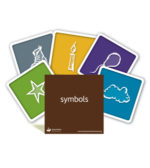 ‘I bought the Symbols cards.

I have used them in a grief and loss group, and in individual counselling sessions. They have all been spectacularly helpful and useful tools. My clients report that they initially thought ‘How can this help?’ But once they chose a word or symbol (or two or three) away the session went.

It has helped people to verbalise feelings and thoughts that they might never have known were there. I have used the whole bundle at once—sometimes a random ‘chunk’ out of the tin (or both tins). They are extremely versatile.’

‘I would like to tell you how much the family carer support group that I facilitate enjoys working with the Symbols cards. These family carers usually care for a partner or a parent with dementia. As you can appreciate the road is difficult and long, with no end in sight.

Some family carers accept and perform their caring role so gracefully, but for some it is almost too much to bear, and to talk about the pain, frustration, guilt and anger is so hard.

I bought the cards to a meeting at the end of last year and I was especially surprised at the effect that the Symbols cards had on the CALD carers. We had a wonderful response from one carer in particular who couldn’t stop talking about the cards he had chosen! Thank you so much for the easing of our difficult paths.’

‘I used the Symbols cards with a client the other day and she chose 5 or 6 which were symbolic for her.  I asked her to choose the one which resonated most with her, and she chose the card of a ‘dead’ tree—shown with branches, but no leaves.  I thought ‘Oh no, she has not moved through her grief over a separation.’  I said, ‘So tell me about this card…,’ pointing to the tree with branches and no leaves, and she said, ‘It gives me hope.’  So I said, ‘Tell me about it giving you hope,’ privately thinking ‘What the?’ because I assumed it was a dead tree.  She replied, ‘It is not dead, it is hibernating.  It’s like its winter, but spring will come.’

She made another appointment, but cancelled, as her grief had dissipated and she felt her life was getting back on track.  She was a psychologist and school counsellor, and when I first put some of the cards in her hands to choose whichever resonated, she’d exclaimed ‘I am hopeless at this sort of thing, I like being over the other side of the desk!’

So, do you sell spare cards, because she took that one with her!  Just kidding—but I’m so thrilled for her. Thanks,

Young carers are huge assets in our community. In the T.I.M.E. Out Sibling Program at Melbourne City Mission, high school kids who have a brother or sister with a disability often don’t often recognise that they are in fact ‘young carers’.

By introducing St Lukes’ materials throughout team games, art projects, competitions and deep conversations we make links between what young people do for their siblings at home, their special skills and talents, their important place in the world, and their huge potential to make a difference in work and society in the future.

Find a Symbol card that is about your role in your family, we ask. Tell us about the symbol. Why did it jump out? What does it mean for you? What do you call your role? Who else knows about it? When are you not like that?

The responses are many and varied: ‘swords’ for the defenders and advocates… ‘rainbows’ and ‘candles’ for the peacemakers and hope-givers… ’helping hands’ and ‘springs’ of energy for the young carers looking after siblings and giving mum and dad a break.

The Symbols cards make it is easy to respond to such choices in ways that empower and build self-esteem in the participants: Wow, what a lot of talent… How amazing you are doing this on top of school and all the normal stuff at your age… How lucky are we to have such great young carers in our world! And resources that help young carers recognise and acknowledge the hard stuff, the growth and the positives in their journeys.

It was one of those spontaneous moments when I found myself having to take a seminar at short notice. The topic was Narrative Therapy and the resource that came to hand was Symbols. With the contents of the neat little tin spread across a table, I invited the students to choose two cards each. The aim of the exercise was to demonstrate ‘thin’ and ‘thick’ narratives (or accounts) and the importance of searching for ‘thick’ or rich narratives in this therapeutic approach.

‘Thin’ narratives are those that give little depth of information and tend to result in the most obvious, but often incorrect, assumptions. For instance, if a woman were to say she was feeling low in the mood and couldn’t sleep, one might assume—without sufficient evidence—she was depressed. ‘Thick’ narratives are needed to develop a depth of understanding and to assist in drawing more accurate conclusions. The woman in this example might be encouraged to tell more of her story revealing her struggle with allergic hay fever and the difficulty of getting effective medication.

In the seminar I facilitated, the students worked in pairs giving a brief account of why they had chosen their two symbols. The accounts were typically ‘thin’ in the first instance. However, after some discussion of the importance of eliciting ‘thick’ accounts in Narrative Therapy we returned to the cards. Now each student helped their partner to develop a more rich account of the symbols they had chosen. During the feedback session it became evident the discussion had, indeed, become much more rich and Symbols had been an ideal choice!

‘I recently bought the Symbols cards.

I have used them in a grief and loss group, and in individual counselling sessions. They have all been spectacularly helpful and useful tools. My clients report that they initially thought ‘How can this help?’, but once they chose a word or symbol (or two or three), away the session went.

It has helped people to verbalise feelings and thoughts that they might never have known were there.

I have used the whole bundle at once—sometimes a random ‘chunk’ out of the pack. They are extremely versatile.’

Preparing to attend the funeral

Using each of these Symbols cards the worker was able to speak with Sarah about the various possible images and symbols she might see at her father’s funeral. The worker and Sarah had three separate conversations over a few days which helped Sarah prepare for, and better understand, what she might experience.

Sarah was also invited to draw her own feelings and thoughts about her dad’s death and funeral, using her own symbolism.

For the past eight years Linda Espie has been working as a loss, grief and bereavement educator in Japan. We asked Linda to share some reflections from her most recent trip and she included some photos of participants using Symbols for the first time…

The Innovative Resources tools I have introduced in Japan have been embraced with enthusiasm and at times delicate poignancy by workshop participants. As an educator working with non-English speaking groups of between 32 and 75 participants the diversity of these products makes them a greatly valued resource.

The group’s diversity not only added to the learning environment but also provided validation—from a rich mix of domains—for the thoughts and feelings experienced by individual participants. Such feedback affirms the need for this type of education and training in Japan.

Like many places, health and welfare professionals here often overlook and under-value the setting aside of time for deep reflection upon their experiences.

Despite this, I have successfully introduced The Bears, both sets of Strength Cards (translated into Japanese in 2004), Signposts (despite the English), Shadows, and most recently, Symbols into my workshops.

I spread the Symbols cards around and wondered how things would develop as participants were invited to scan, choose a card and then share in pairs and groups of four. It worked!

The connections and engagement, mood and tone that developed as participants held one or more of the Symbols cards were very evident. At times the room was a-buzz with lively chat and at other times more subdued and genteel.

My most sincere thanks to St Luke’s Innovative Resources and my translator!

Linda Espie, Connecting Through Shared Grief (from the Symbols booklet)

Brian and Jill both agreed that they needed to see someone. Their 30-year marriage had had plenty of ups and downs but with their children gone their expectation about being contented ‘empty nesters’ just wasn’t happening.

Their relationship counsellor suggested they might look at their marriage through a different lens. She introduced the Symbols cards and started with the question: ‘Would you each pick those cards that might tell me something about who you are as individuals and as a couple?’

Each chose about six cards. The only card they had in common was the symbol of a dog. This was an initial surprise but as they talked, it seemed to make sense. Their long-time pet dog, Buster, had disappeared some six months ago. They had never heard what had happened and while they were resigned to not seeing Buster again they had never talked about their feelings or about getting another dog.

Buster had really been Jill’s dog as she was around the house more and did all the feeding. For Jill, Buster had been a companion; he helped her fill the empty nest and feel safe. For Brian, the walks at weekends had provided exercise and a way of letting off steam from his job. Both were acutely missing Buster. Selecting the same card highlighted their shared experience and opened up a starting point for connecting emotionally once again.