40 Cards for building conversations towards sustainability

Many of us are having conversations around sustainability and creating a healthy future for our planet and its inhabitants.

The set includes 40 individual cards with 40 intriguing conversation-starting questions, 40 statements and 40 inspiring quotes. It is perfect for prompting rich discussions about environmental sustainability and how we as individuals and teams can design the future.

Talking ecoLogical also comes with a digital booklet with helpful suggestions on how to use this resource. 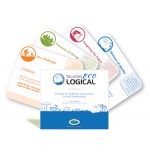 ‘Just read the online booklet and am feeling very excited and invigorated! This resource really resonates with me to the core of my sustainability being.

I didn’t realise just how much the online booklet had to offer when I bought the cards. The booklet offers a great set of tools if you’re new to facilitation or if you’re an old hat. I am really looking forward to using the cards and techniques as an educational and organisational change tool in my corporate sustainability activities in the next year and beyond.’

‘I am offended at this Food card from the ‘Imagining the Future’ suit!’

‘Because farmers have been doing amazing things to improve soil quality for years!’

‘But they’ve been adding too much fertilizer and chemicals and feeding cows pellets and caging chickens and removing vegetation.’

‘That is a very simplistic and stereotypical judgment to make. Farmers care a great deal about their land and are always thinking about the next generation.’

‘But couldn’t you say the same about businesses in the city? They are wrecking the planet for different reasons even though they have people who care running them. Farmers might care, but they are doing damage.’

‘Some are doing damage. Many are doing wonderful things. And the examples you just used are not black and white. There are a lot of grey areas. Define ‘free range’ for example? And cows are mostly grass fed in Australia. I think businesses in the city and farmers are facing the same issues. In many ways it’s the big systems we’ve set up that are the problem. Fossil fuels, global companies, politics and media slogans make it feel too hard for farmers and businesses to run a good business without ignoring the environment. I just get sick of people going off at farmers when they have no idea how hard they are trying.’

‘So wouldn’t getting back to local help if the big companies are the problem? I’ve heard about Food Hubs in America that set up to supply their local area first and to keep the profits local. If local people were more connected to local food and local place wouldn’t that in turn help farmers care even more for their land? They would know the people buying their food and visa versa.’

‘I guess so. I haven’t heard about food hubs…’

‘Are you still offended at the food card?’

‘Yes. But I guess given our chat it’s done its job.’

‘I ran four 75-minute workshops over 4 days that I called ‘Community: a Cosmos of Conversations’. At one of the workshops I did a serendipity activity asking each person to randomly choose 3 Talking ecoLogical cards and then to talk about one of these that had most relevance to their environmental concerns, the concerns in their community and what they were doing with these concerns.

It worked a treat. Everyone has an interest in the environment. And the cards were praised for the way they opened up the conversations. And as you know, when the cards work it is hard to shut people up!’