Stunning, full-colour photographs to ignite storytelling, reminiscence and reflection… before you even know it’s happening.

Photographs have a unique ability to stimulate the imagination, memory and emotions. They can be powerful catalysts for storytelling, writing and reflection about our values and priorities—and changes that we want to bring into our lives.

Picture This is a set of 75 full-colour photographs capturing different aspects of our journey through life: the mundane, the whimsical, the soulful, the playful, the challenging, the joyful, the imaginative. The photos, taken by Brent Seamer and others, present slices of both urban and rural landscapes, capturing the detail of the everyday and the extraordinary.

Since it first appeared in 2007, Picture This has been one of our best-selling resources, find its way into schools, workshops, organisations, communities, prisons and counselling situations. Like many of our resources, it is readily accessible to those who prefer to interact, reflect or learn using visual or tactile approaches.

This highly interpretive, versatile tool can open up conversations, storytelling and creative writing about feelings, goals, and points of view. Use Picture This to oil your imagination, memory and emotions, and get your creative juices flowing! 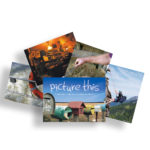 ‘I used Picture This to help a new team discover what is important to them as a team and set group norms.’

Picturing Community Aspirations in the Western Downs, QLD (excerpt from SOON, May 2015)