Be in the driver’s seat of your life!

VRRHHMMM! Sqeeeealll! Putter, gurgle or DING!!! What kind of car are you today?! If you’ve never used Car ‘R’ Us then strap on your motoring goggles and make the acquaintance of these boisterous, quiet, shy, angry, happy and just plain goofy car characters, who provide rich metaphors what it is to be human.

Inspired by Choice Theory and Reality Therapy, Cars ‘R’ Us is a unique, interactive tool for exploring both emotions and the significance of choices in our lives. The 52 digital Fleet Cards are accompanied by 16 digital Know Your Vehicle Cards, designed to help you think about the choices you make and the interconnections between your feelings, body messages, thoughts and actions. There are also 10 digital Thinking Bubbles, a digital Journey Planner and a digital Owners’ Manual for building conversations about decisions, planning and the actions we take.

The Fleet Cards are ideal for talking about goals and how we feel or respond in particular situations, and the car metaphor is perfect for engaging boys and men in these important conversations.

These are just some of the countless questions to explore with this colourful cavalcade of car characters!

What Drives the Choices we make? 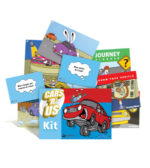 ‘I work in remote Aboriginal communities and, among other things, deliver protective behaviours training to children.

We love using the Cars ‘R’ Us cards, as the cards are so expressive and are a good tool to encourage kids to identify and name feelings. The kids love the cards—cars are a highly valued resource out here, so it’s great to have a visual resource that connects with the kids!’

‘I used the Cars ‘R’ Us cards this morning in the company meeting. I got everyone to choose a card that resonated with them and then discuss it. It was an excellent session—lots of laughter, lots of engagement and insights as to how people felt. I followed up with brief talk about attitude, which summed up the exercise beautifully. It’s a winner! The cards work brilliantly at eliciting feelings and emotions. I think it’s particularly interesting as the automotive industry is a pretty different culture to community services where I’ve worked before.’

‘I use Cars ‘R’ Us in weight loss talks. I get people to pick up the card that represents where they are now and where they’d ultimately like to be. It’s quite amazing the emotions that come from people. People might pick up a card showing a car stuck in the mud or at a crossroads, and then pick a car with lights on or one that looks glamorous. You see their faces light up. That simple act of picking up a card and thinking ‘That’s how I want to feel!’ can be really significant. The shift that can happen emotionally is huge.’

– Donna McGrory, Your Life is Now

I work in remote Aboriginal communities and, among other things, deliver protective behaviours training to children. We love using the Cars ‘R’ Us cards, as the cards are so expressive and are a good tool to encourage kids to identify and name feelings. The kids love the cards—cars are a highly valued resource out here, so it’s great to have a visual resource that connects with the kids!’

‘I find the car analogy great to use particularly with dads. Dads instantly understand that if one car tyre is a little flat it affects the whole car. In life, one incident or additional stressor in one area can affect the big picture. Cars ‘R’ Us provides the ‘aha’ moment for the real work to begin.’

‘I carry a suitcase full of your wonderful resources to most of the schools I visit, and model ways of using them in the PD sessions I run for teachers. Last week I was involved in leading a two-day Whole School Wellness Workshop in Queensland. One of the highlights involved using the Car ‘R’ Us cards. Just before everyone was about to leave at the end of the two days, we used them as a fun and light-hearted way to sum up where schools felt they were on their wellness journey. I just wish I was able to capture all the wonderful things teachers said as they took turns to describe their chosen card and its meaning for them.’

The MDJ Foundation (MJDF) was formed in 2008 with the aim of providing better quality of life for indigenous Australians and their families living with Machado Joseph Disease. The activities of the Foundation focus on five key areas: research, advocacy, education, equipment and services.

For our discussion about Foundation’s priorities in the future we used the Cars‘R’Us cards. Small groups used the cards to describe how the ‘MJDF Vehicle’ was travelling, where it was going, and what resources it needed to complete the journey ahead. Plenty of the cards show cars that suit the NE Arnhem Land landscape with its rough roads and isolated communities surrounded by the sea. People up there are very familiar with the resources needed to keep a vehicle on the road for personal, family and community access. They have plenty of stories of mishaps and risky situations on the roads and beaches a long way from mechanical help!

The car metaphor worked well because people know what it means to be resourceful and creative, and get on with things after a journey has gone pear-shaped! Max, the character on the cards, provided a useful perspective to help us consider the MJDF journey from within the car and from outside looking on. He also enabled people to have a chuckle about the challenges encountered on rocky roads or in sticky situations!

In March 2009, I conducted a debriefing over two days with the Country Fire Authority Peer Support Personnel. Most people had been involved in peer support across the state following the worst peacetime tragedy in Australia. 173 people died in firestorms on February 7, 2009.

Peer support personnel have undertaken intensive training in order to understand and assist C.F.A. members and their families in times of difficulty and trauma. Some have completed a Basic Intensive Week in Choice Theory. C.F.A. peer support is a high quality and professional organisation.

The process involved the use of Cars ‘R’ Us. Each person selected a card(s) which represented their feeling state(s) during their work with bushfire survivors. They wrote up a ‘total behaviour’ of the situation, describing the feelings, physiology, thoughts and actions that occurred at this time.

The next card chosen represented their present emotional state in relation to the above incident including thoughts, feelings, physiology and actions. As a result, they were able to see how they had processed the event, and how by changing actions and thoughts, they were able to alter their feelings and physiology.

Throughout the weekend, many stories and experiences were related within the model of total behaviour. The cars provided a clear focus to understand and process the experiences and feelings. Every person had the opportunity to contribute and make sense of the situation using Cars ‘R’ Us.

Feedback from participants confirmed that Cars ‘R’ Us was extremely helpful in assisting, understanding and processing the traumatic events. In addition, participants learned the basics of total behaviour and came to understand the connection between actions, thoughts, feelings and physiology. It was also possible to identify some common themes emerging from the experiences, including Choice Theory Axioms, including:

‘The Cars gave me something to hang on to.’
‘I’m still in the sand but my wheels are no longer spinning.’
‘I was able to put my feelings into context using the Cars.’

Ivan Honey is a psychologist based in Bendigo, Australia. He is a leading exponent of Choice Theory, Reality Therapy and Lead Management.

Revving up for fun and feelings in central New York (SOON, March 2015)

Susan LaFever is an elementary school counselor at Norwich City School District in central New York, where she works with students from Pre-K to 2nd Grade. In the past few years Susan has purchased a number of Innovative Resources’ card sets at her own expense— ‘because they are awesome!’—and, boy, does she use them in some fabulously creative ways!

Susan recalls studying for her Play Therapy certification when she unexpectedly stumbled onto Innovative Resources. ‘I believe I found them when searching the internet,’ she muses, ‘[but it] has been a while since I started using your resources, so I’m not positive.’ At the time, she had been thinking of working in a hospital, ‘However, I decided I love the excitement of learning found in a school setting when working with children.’

So how does Susan use her cards? With sophisticated simplicity! ‘Each year I use one of the card packets as my “theme” and design at least one opening activity to accompany the cards.’ That opening activity is used with students and their caregivers when they meet the school counselor for the first time. In 2013, she picked Stones … have feelings too! and developed an activity for children in changing families. ‘Students used the Stones stickers to create family portraits illustrating their homes,’ including their multiple homes in the case of children staying at different family residences.

This year, the Cars ‘R’ Us cards have been colourfully displayed in Susan’s office (‘my roads started on the wall!’) and she has also been using The Bears. Students made feelings books using The Bears as their starting point, while other activities have been developed using Strength Cards for Kids.

‘The following resources I have used with primary, secondary and adults. They are not only useful for identifying how they are feeling now, but also how they would like to feel in the future. This provides a platform for change and growth.

I have found the Innovative Resources

very beneficial in engaging children in conversation, getting their attention and providing a safe environment for exploring, identifying and expressing their feelings.