Getting from here to there… (Two simple questions)

I once heard a story from a very skilled and experienced social worker about using two simple questions:

At the time, he was working with a teenage boy who was refusing to go to school. He spread out the Reflexions cards and asked the young person to pick one (or more) that said something about how he is feeling about/at school, and another that said something about how he would like to be feeling about/at school. The social worker placed the first card on the left and the second card on the right. They chatted about the one on the left briefly first, and then the one on the right in much more detail.

In a short period of time they had quite a vivid description of the young person’s goal, or favoured ‘picture of the future’. All you solution-oriented, strengths-based practitioners out there will no doubt agree on how useful it is to focus on where the person is heading—their goal, their best hopes—rather than getting bogged down in going around and around in the problem. Problems can be very sticky and magnetic—they can so easily pull us into a spiraling vortex that leaves hope in its dust.

No, no to that, and yes, yes, to the land of hopeful possibilities—by whatever means you can invite teens to go there. 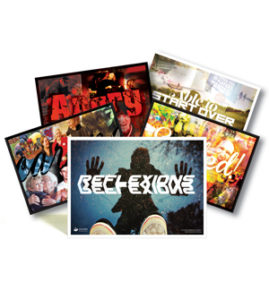 Then they sat back and the social worker asked, ‘How are you going to get from here to there? ’Dunno’, the young person replied.

The social worker then selected three more Reflexions cards. You can’t miss them–they stand out from all the rest of the 48 cards because they start with the phrase ‘Able to …’ (All the others have a single word on them.) While there are currently only three of these in the set, they are very powerful because they name three key factors that are often pivotal in a positive shift. They are: ‘Able to make decisions’, ‘Able to work with others’ and ‘Able to change’. They could be called the ‘Catalysts for Change’ cards—or maybe the ‘Getting from Here to There’ cards.

What other key factors do you think bring about positive change for youth? What other ‘Able to …’ cards would you include in the set? We’d love to hear your ideas.

In an earlier blog From Here to There  (Simple is Best), I suggested that you could ask the same two simple questions for any of the 60 or so card sets we publish here at Innovative Resources:

Simple though they may be, these two questions—or variations of them—are really worth a try. They can be surprisingly effective conversation-starters, especially when teamed with good visual images.

Other Blogs by this author:

Living Questions… Are we there yet?

The Nature of Strengths : Holding On and Letting Go

From Here to There (Simple is Best)

« From Here to There… (Simple is best) Values: Moral will, practical wisdom and ‘doing the right thing’ in human services »
↑