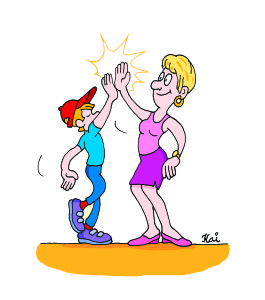 According to the Kids’ Skills method, issues confronting a child are best resolved by having the child learn a specific skill. This idea is based on the observation that when a child is faced with a problem, it is often due to the fact that there is some skill lacking, and that when the skill is acquired the problem goes away.

Let’s imagine that you are the mother of a wild boy. His teacher comes to you and says, ‘Your son behaves aggressively towards the other children in the class.’ How do you react to her words? Do you thank the teacher for bringing the issue to your attention and begin to discuss it with her calmly? I doubt it, because that would make you an exceptional parent.

If you are a normal parent, you feel that you have been blamed and you react accordingly by doing what people do when they feel attacked. You defend yourself by deflecting the blame onto someone else. You might say, for example, ‘He never does that at home’ or ‘That’s because he is being bullied by his classmates’ or even ‘I am never aggressive so he must have got this behaviour from his father!’

On the other hand, how would you react if the teacher brought the same issue up in a different way? She wouldn’t say a word about your 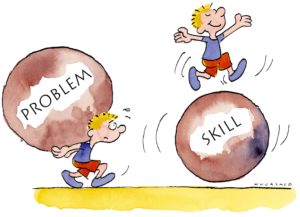 son’s problematic behaviour but would approach the issue by talking to you about the skill she thinks your son needs to learn. Here’s what she might say:

I’ve spoken with my colleagues about Karl, and we’ve been thinking about the most important thing for him to learn so that he can be successful at school. We’ve come to the conclusion that it would be important for him to develop better self-control and to stay cool even when others are not kind to him. How do you feel about this idea?

Disarming, isn’t it? How would you react now? You might even consider saying something like, ‘I have thought about the same thing’ or ‘He definitely needs to develop better self-control, and to tell you the truth, I would have a use for that ability myself.’

Talking about skills to be learned rather than problems to be overcome is a more constructive and cooperative way of approaching the issues that children face. 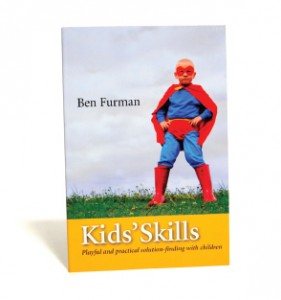 (‘Kids’ Skills’ is a 15 step method by which children overcome difficulties in a positive and constructive way by learning new skills.)