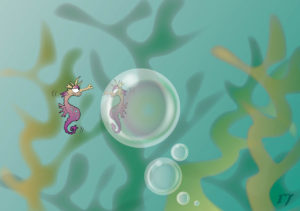 The Role of the Observer

‘Two things make a story: the net and the air that falls through the net.’

Keen observers of the Funky Fish Feelings cards will have noticed that a seahorse manages to make an appearance on every card. (Well, all except one card where it is left for you to imagine him somewhere in the whirlpool!)

Introducing Farr Lapp, the seahorse, so named because he:

Farr Lapp doesn’t appear on each card because he has a rampant ego. Rather, Farr Lapp has a very important role; he is ‘The Observer’. Having an observer can be very useful. An observer can scan action and events; an observer is in the picture in one sense but also has an arm’s-length (fin’s-length!) relationship with the subject. An observer can observe, reflect on, ponder and evaluate the scene before them.

Observers are not neutral, what they observe has an impact on them. Farr Lapp often looks quizzical and bemused as he studies the fish in question. At other times Farr Lapp can be seen to mirror the emotions of other fish or to react to the feelings of the fish depicted in other ways.

Having an observer as a witness creates different ways of building conversations, and can turn a two-person dialogue into a ‘trialogue’.

One can thus ask such questions as:

Using an observer is a longstanding tradition in social work and counselling. Sometimes it can be very useful to ask questions that an observer might ask, and to consider what an observer’s answers might be. Sometimes the observer can be a special person who might have a particular relationship to the subject, such as a parent, grandparent, special friend or even a favourite teacher. We each have a special person in our life; a person who sees us differently to the way acquaintances or strangers might see us. Hopefully, our special person values us and perhaps sees that our positives outweigh our negatives. 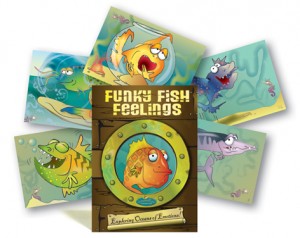 Observers or complete strangers can be special people because:

Of course, Farr Lapp observes himself, as we all do from time-to-time, especially as we develop the capacity to reflect on our feelings, attitudes and behaviour. This is why he gets his very own card! Don’t be surprised if Farr Lapp looks into the mirror of self-reflection and is, by and large, at peace with what is reflected back. If we feel so inclined, we can ponder what it is that may have led Farr Lapp to this treasure of wellbeing within himself?

« Labelling – when is it a good thing? Stereotypes: More than just… »
↑