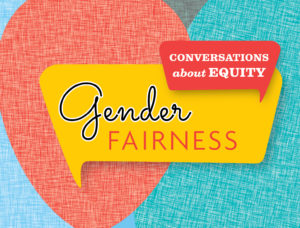 Gender Fairness: the conversations we have to have

‘Many of us are not practised at talking about how social constructs of gender have influenced our own identity, our relationships at home and work, and our expectations of each other,’ writes Linda Beilharz (former executive officer at Women’s Health Loddon Mallee) in the preface for Gender Fairness—a set of cards for creating conversations about gender equity, particularly in relation to women.

‘While people generally agree that society should be fair, we noticed that many were unaware of how unfair it currently is. Unfairness is invisible because it’s disguised as normal. We knew we had to find a way to help people talk about gender and gender equity when we, as a women’s organisation, started to raise it as a health issue for women,’ wrote Linda.

This is why Loddon Mallee Women’s Health approached St Luke’s Innovative Resources in 2014 to partner them in developing and publishing a conversation-building tool.

The final result is a set of 24 cards intended to provoke rich conversation in workplaces, organisations, families, businesses, teams, and groups about what is fair and what is not. It is arranged into 6 colour-coded suits, each one featuring provocative questions and a cartoon in the time-honoured tradition of satire and social commentary.

These conversations about gender fairness are becoming even more urgent as we begin to understand even more clearly the place that gender stereotypes and power imbalances play in creating the foundations for violence against women.

The Gender Fairness cards attempt to address the key determinants of gender-based violence in order to help prevent violence from occurring. Using the card set challenges our thinking around key social and economic determinants of violence by promoting equal and respectful relationships, regardless of gender identity. The cards aim to prompt discussion and open up themes around:

All groups, teams and organisations have blind spots. Fairness is an aspirational concept that requires constant re-evaluation. It is not a place we can ever claim to have reached once and for all. It demands ongoing scrutiny and consultation. Conversations about gender and gender fairness, and about what constitutes a respectful relationship are vital and belong in schools, organisations, sporting clubs, groups and teams throughout our communities.

While the Gender Fairness cards are intended to bring to light hidden processes of discrimination against women in particular, they can be used for prompting conversations about gender equity that go beyond binary conceptions of male and female to include fairness across diverse gender identities. 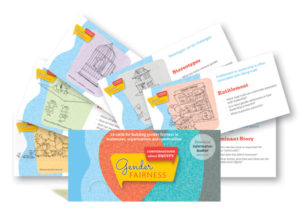 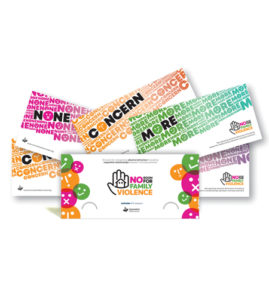