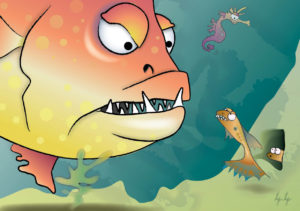 Sometimes little fish need to speak up about treating people respectfully, especially in sporting and after work environments.

Here is an example of a recent experience shared with me—similar to the ‘drinks after work scenario’ we have seen on television, where a man’s colleagues challenged his behaviour towards his partner on the phone. Such examples are great because they play a part in the mammoth task of holding people to account for behaviour that is no longer acceptable as ‘the norm’.

The scene: End of year cricket bus trip—away for the weekend.

A girlfriend calls her cricketing boyfriend on her way home—just like she does every evening. The phone gets passed around the bus and all the cricketers, in a jolly frame of mind, contribute to the phone conversation. All good so far, until the phone makes its way to the coach (big fish), where the conversation is ended abruptly with the comment, ‘We don’t talk to partners when we are on a bus trip,’ and rudely hangs up.

The girlfriend is feeling very much like the ‘little fish’, and ponders for a while, speaks to a few close friends and then, in point form, responds to this behaviour. The boyfriend and fellow cricketers support her response, but she hears nothing back from the coach.

Two weeks later: It’s the cricket club awards night, and again the girlfriend is feeling very much like the ‘little fish’, and she is nervous about seeing the coach. (She has scripted a number of responses in her head.) On entering the venue, the coach makes a direct line straight to the girlfriend. He apologies for his behaviour and asks for her forgiveness. He approaches her several times throughout the evening to reiterate his apology, in front of his peers, family and friends. The other cricketers watch his behaviour and also show their support for the girlfriend. So the ‘little fish’ is promoted to ‘big fish’, and the ‘big fish’ has stepped up in displaying respectful behaviour. 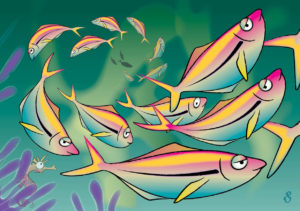 It is a shame that people have to experience disrespect in the first place, and then the anxiety that comes from standing up to the ‘big fish’ in order to make change happen. But aren’t we so very fortunate to have so many brave ‘little fish’ out there? Let’s hope that as a society we can learn to all swim together—as a school of fish, where there are no ‘big fish’ and no ‘small fish’.

‘Respectful behaviour’ is a term that is talked about more and more, and St Luke’s Innovative Resources has several resources that encourage conversations about feelings, mateship, respect and relationships.

The fish metaphor is expanded further in the set of cards called Funky Fish Feelings. You will notice an observer (called Phar-Lap, the seahorse) on every card, making it easier for a person to externalise and speak about their feelings in less confrontational ways.

Similarly, Mates Traits illustrates the various strengths and bumps in relationships—like ‘We celebrate’ and ‘We have our moments’, and is a great way for families and children to talk about their relationships at home, in the school-ground, or in any group activity.

And, in reference to the story above, No Room for Family Violence is a resource that could be used in sporting groups to really stimulate conversations around what is respectful behaviour in a relationship, and can start with ‘Want I want more of’ and lead into conversations about ‘What I want none of’. 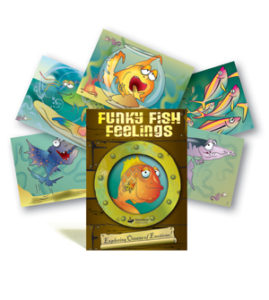 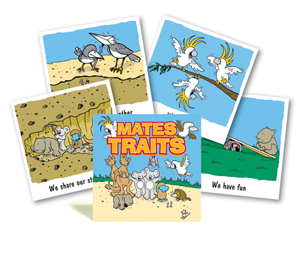 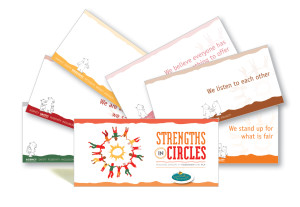 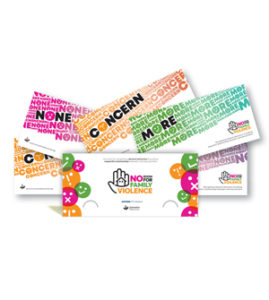 « What is Social & Emotional Literacy? Gender Fairness: the conversations we have to have »
↑