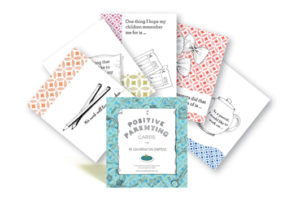 ‘Commonly, parents accessing family services feel they are in a ‘spiralling down’ phase. They can feel worn down by the focus on their faults and deficits—an approach that can easily reinforce a sense of helplessness and ignore the moments when the situation is not so bad.’

The concept for the Positive Parenting Cards was the brain-child of Lorraine Leitch, a member of the Family Support team at St Luke’s in Bendigo, Victoria (now a division of Anglicare Victoria). Lorraine and her colleagues are frequently talking with parents struggling in different ways with the demands and expectations of their parenting role. They work alongside families who have reached the point where they feel unable to parent their child or children adequately. Some have been investigated by child protection because of perceived issues of abuse or neglect. All are struggling to cope with the circumstances in which they find themselves as parents. Lorraine wondered, ‘What kind of tool could be created to invite people to tell their stories of being a parent?’ Out of this reflection arose the idea for a set of conversation-starting cards. She wanted the cards to complement (but not replace) the other tools, practices and forms used in family support work.

The cards were conceptualised as a tool for ‘spiralling up’; a way to encourage parents to share their own experience of being parented and to reflect upon changes they had made, or hoped to make, in the way they parent their own children. Lorraine said, ‘Rather than asking questions, I trialled a series of sentence starters (illustrated with some simple images) aimed at helping parents reflect on what they want their child’s experience of family life to be, what they think the influences on their own parenting are, and what they think their strengths as a parent are.’ She continued,

‘The reflective conversations prompted by the cards have allowed some parents to put new meaning to their experiences of the past, and enabled them to re-story their perception of self and their problems, freeing them to create a new view of the future of their family.’

Lorraine approached Innovative Resources, with her prototype set of cards. What followed was a series of drafts (and re-drafts) of the sentence starters, and an emerging visual style based on the delightful line illustrations produced by Anna Marrone. The criteria that guided the development of the cards included that they be perceived as safe, non-threatening, inviting, gender-inclusive and readily-useable in a broad range of family services, counselling and group work settings.

The 40 cards in the Positive Parenting set are designed to invite conversations about the joys and challenges of being a parent of a child of any age.
Each card has a phrase that works as a sentence starter, such as:
• We really laugh together when …
• As a parent I really enjoy …
• A good thing about my family is …
• I would like our family to be doing more …
How a sentence is finished is entirely up to the user. There are no right or wrong answers. There are no criteria for judging whether one story is better than another.