IN RECENT YEARS, THERE HAVE been several exciting and radical developments in the areas of communication and change. The first is the rise of constructivism or social constructionism. This is the idea that reality isn’t quite as fixed or set as we imagined it to be. Physicists tell us that reality shifts depending on how it is observed and measured and that there is no way to objectively measure reality because we are always changing it as we observe it. In the United States, there used to be a newscaster who was trusted by the nation who delivered the evening news. He ended every broadcast with his signature sign-off: “And that’s the way it is, December 5, 1959.” After many years, this venerable veteran finally passed the baton to a younger man, also trusted, but of a new generation. This new broadcaster had a new sign-off: “And that’s a part of your world, December 5, 1999.” How the world has changed since we were so certain that there was only one truth and we knew it. We “knew” that aborigines were “primitive” and that White, European culture was “advanced.” We “knew” that women were less capable than men. Rob McNeilly shows how this development, more than being humbling and creating relativism, is an opening to many new possibilities.

Another development is in the area of language. Language has been found to influence our moods and emotions, our actions, and again, even our reality. When a superpower attacks and civilians are killed, it is called collateral damage. If it is your family, it is called murder or genocide. Abortion is called pro-choice or murder, depending on your view. The different words lead to vastly different feelings and actions regarding the same “reality.” Again, Rob McNeilly shows how to use this new awareness of the power of words and the deliberate choosing of phrases and words to create an environment in which change naturally occurs.

In this book, ‘Doing Change’, McNeilly details shifts that may at first glance seem simple but are actually qui 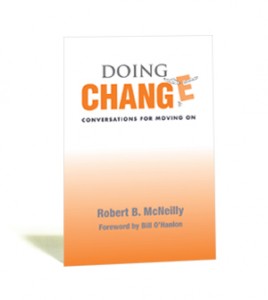 te profound. He invites the reader to shift from a focus on problems to attending to concerns, which opens up entirely new ways to solve dilemmas. He also invites a shift from problems and pathology to an appreciation of resources, competence, and solutions. Last, he invites clinicians to move from an authoritarian, expert position to one of partnership and collaboration. All these shifts, while producing profound results clinically, can have the unexpected benefit of reducing stress and burnout for the clinician who adopts them.

Rob McNeilly has written a clear and practical guide to the latest developments in the counselling field. His concern with ethics and respect shines through the text. Filled with engaging anecdotes and an accessible style, it is sure to bring an all too uncommon common sense back into clinical work.