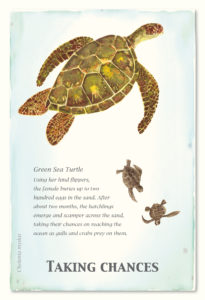 Using her hind flippers, the female buries up to two hundred eggs in the sand. After about two months, the hatchlings emerge and scamper across the sand, taking their chances on reaching the ocean as gulls and crabs prey on them.

How sweet are some people?

Just when I think that the world is heading towards the dumpster and we have politicians who overlook those less fortunate, my faith in humankind is regenerated.

I was interstate at a conference and had arranged to meet up with some long-term friends who I often don’t see for years at a time. During the evening we talked about many things, but one conversation was about the professions and qualifications of many taxi and Uber drivers. Our drivers are often highly qualified doctors in their countries of origin but have to pay high costs and pass difficult exams in order for their qualifications to be recognised in Australia. (I’m not against setting high standards for our medical professionals, but I do wonder about the high cost of accreditation when we have so many communities that have no doctor available.)

I caught a taxi out to my friends’ family home and the driver gave me his number to call when I was ready to be picked up and taken back to my hotel. It was about a thirty minute trip so we had plenty of time to talk. In thinking about the conversation we had over dinner, I asked him what he did when he wasn’t driving. He is a student in business. His mother, whom he is very close to and misses dearly, convinced him to leave Pakistan and study in Australia—to build a ‘better life’ for himself.

There are many who take that leap of faith and come to Australia for a ‘better life’. It reminds me of the Nature of Strengths card set—specifically the green sea turtle who buries her eggs, leaving the hatchlings to take a chance at making it safely to water. Much like my taxi driver’s mother who cast him out into the world, with the very best of intentions.

We talked about opportunities for employment post his studies and I asked him what he would do if money was no object. I was blown away and very endeared by his response.

He said he would work to remove poverty so that everyone had food and shelter, and equal opportunity for success. He was very passionate and very serious about it and this led to a conversation about the kind of leaders we need in the world today.

He has no idea where he will work when his studies are completed or what opportunities might open up for him, but I really hope that he—and 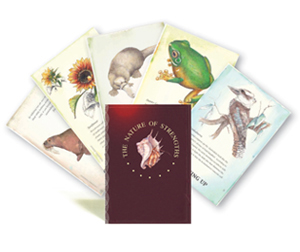 people who share his ambition for a fairer, more equal society—get to achieve their goals—that their ‘taking chances’ pays off.

« Everyone Deserves Respect: Rainbow Talk The Resonance of Opposites »
↑