The Strengths Approach to Listening

‘When you talk you are only repeating what you already know. But when you listen, you may learn something new.’     Dalai Lama

Listening is the skill most critical for engagement. The desire to be helpful can sometimes get in the way of good listening and therefore engagement. Sometimes our enthusiasm for finding strengths and positive stories can get in the way of listening to people’s hardships and worries. Equally, our interest in the problem can blind us from seeing strengths. It’s important to remember that listening is not the same as problem-solving, although essential to it. The skills of active listening are important (summarising, checking, paraphrasing, acknowledging, appropriate body language, eye contact and so on).

These skills help ensure that we:

Good listening is an essential skill in working with people. The strengths approach invites us not only to listen well, but to listen for three essential things:

Strengths-based listening assists people to reframe their realities and experiences, establishing a springboard for ways forward. The following practice story comes from an interview by Andrew Shirres (2016a) with Phil Watson, a family services team leader. Reflected in this story is the power that acknowledgement, validation and listening in a strengths-based way have to create change. Strengths can be found even in negative experience and behaviour, and the way we frame people’s behaviour can profoundly affect change.

Phil:
I worked with a family recently and the guy had a background with the gangs. [He] was inclined to be quite explosive and had a history of being quite angry. One of the things from strengths-based [practice] that made it really easy was just to sit … and when he got angry … say to him, ‘Hey look, I really appreciate how much you care because your anger is evidence of the fact that you care very, very deeply about this.’ And what that really did was gave him an opportunity to actually be validated. For actually having a strength of feeling and concern about his family … not being judged about the way in which he behaved or demonstrated that. That then gave him an opportunity to sit back and think, ‘Yeah, actually … It’s actually OK for me to care. Maybe my behaviour isn’t the best.’ So it really then gave us an opportunity to have a conversation about … it being OK for him to feel those things really deeply but was there a better way that he could manage, that actually wouldn’t impact or make people around him frightened?

Andrew:
So rather than tell him how he should manage something like that kind of behaviour his participation in that process, in designing the actions himself, if you like, made a difference to your working relationship?

Phil:
Oh, absolutely because it then meant that he understood for the very first time that his getting angry was not necessarily a bad thing ’cos it demonstrated to him that he really did care about things. And previously he had been told that obviously he didn’t care ’cos all he did was get angry. And strengths-based [practice] allowed him to see things in such a way that he could address his behaviour. He really just needed someone to acknowledge the fact that he cared. And for someone to actually identify that just because we behave badly doesn’t mean we have bad intentions. And once he could distinguish the difference between his belief and his behaviour, he was then able to act in a way in which he could begin to match his beliefs and his behaviour. And I think that is one of the great things about strengths-based [practice]. It allows people to be empowered to match their beliefs and behaviours in a positive way. 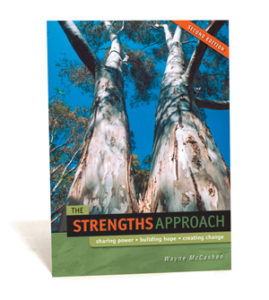 « One Step at a Time Ethics: A Practitioner’s Life on the Edge »
↑