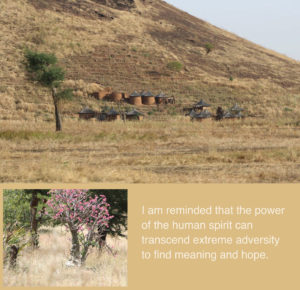 Nicole Rotarua got in touch during a short break in Nairobi, Kenya. Here’s her moving account of a team building session in Sudan.

Since 2013 I have been working in the Nuba Mountains, a site of war and conflict in Sudan. The Nuba are a resilient, determined, courageous and hospitable people struggling for liberation, dignity and education. The crimes against humanity in the Nuba stem from Khartoum’s declared vision of a Sudan that does not offer equality for its non-Arab and non-Islamic citizens.

Recently I was invited to do some team building sessions with the Voice of Peace radio station staff. A Comboni sister directed a station staff of ten: two women and eight men. Their ages span from early twenties to mid-thirties. The team had been together for several years. Their mission involved keeping the community informed of the war situation and producing a wide range of educative programs for the local community.

One of the team building sessions was called ‘Come Live into the Light’. The focus was on strengthening the team’s unity and appreciating its diversity. The aim was to strengthen the group by identifying the qualities of Voice of Peace.

As part of my facilitation, I used the Mates Traits cards. Each member was asked to choose one card that reflected a quality she or he believed was in the group, and the cards were placed in a central space. Discussion about each quality followed and examples of that quality in action were given. Following the discussion, members placed the cards in order of priority—the most important card to be placed at the top and others to follow.

Robust discussion took place during the ordering and prioritizing. Members were free to change the order but had to explain why and get consensus from the group.

A member of the group who had been watching and listening quietly finally spoke. ‘There is a card missing,’ she said. I gave her paper and a texta to write the missing word. ‘‘Love’ is missing,’ she said, ‘Without that the others cannot follow. It is the first card. All others come from this one.’ She placed the paper at the top.

Her reflection stopped us all. There was silence, then a long pause. Her comment resonated with everyone. 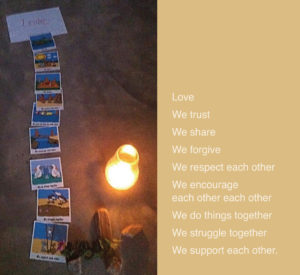 After a time, discussion resumed but at a deeper level. Issues that had been part of the team were  named, and ordering and reordering of the cards followed. This time reasons given reflected more authentically the current strength of the team—strength that had been born of angst and misunderstandings that they had struggled through. The final ordering of the Mates Traits cards was declared a truer reflection of the team.

As I look again at the final selection of Mates Traits cards made by the Voice of Peace team I am reminded that the power of the human spirit can transcend extreme adversity to find meaning and hope. The human spirit is far stronger than adversity. We have seen this expressed by many people throughout history, including Viktor Frankl, Nelson Mandela, Anna Frank and Etty Hillesum.

For this group of Nuba people, their personal struggles with misunderstandings and angst whilst living in a war zone of complete chaos, utter de-stabilization and untold suffering brought them to put Love above cards for ‘to trust’, ‘to share’ and ‘to forgive’.

I come out of a western orientation where competition, materialism and individualism are endemic. I find it compelling to see the order of values chosen by the Nuba Voice of Peace team. There is much to ponder and tussle with.

Mates Traits is a powerful resource. The cards enabled members to recall and articulate experiences as well as to facilitate rich discussion. The captions on the cards ‘spoke’ to the group along with the directness and simplicity of the characters’ expressions. Many of the drawings brought smiles and laughter. Some of the drawings may not be part of the Nuba experience, but they had their place in widening and brightening the world of the Nuba. 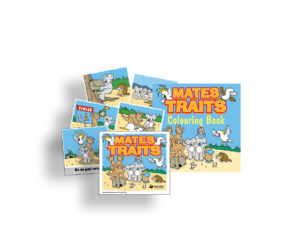